10 DESIGN and Buro Happold have won the international design competition for the key signature gateway bridge for the new Shizimen Business District in Zhuhai, China.

The feature bridge is the gateway entry to south China’s new planned commercial hub and also marks the connection of the Shizimen Canal to the Pearl River Delta.

Working together in one of their first collaborations the 10 and Buro Happold team set out to create a simple and elegant structural solution for a bridge that would be a visual focal point both within the Shizimen District itself and along the Pearl River Delta coastline.

The winning bridge scheme proposes an undulating ribbon of structure that wraps around the 6 lane road deck in a continuous sculptural loop form. At low levels the loop cradles the road deck, with the structural ribbon then soaring upwards to create 2 triangulated arch forms.

These triangular gateways, one primary and one secondary, support the road deck over 2 separate distinct spans via suspension cables. The primary triangulated gate is 100m in height and by diagonally crossing the deck of the bridge celebrating not only the crossing of vehicular and pedestrian traffic, but also the meeting point of the canal with the Pearl River Delta.

The continuity of the loop structure is visible from the opposite mainland shoreline to the west, and appears as a dramatic free standing infinity loop. 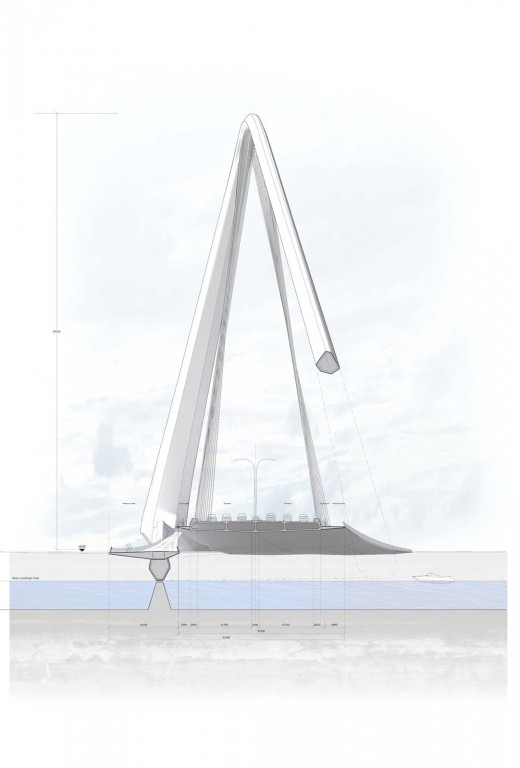 Complex coastline conditions created an odd and asymmetric span, however we realized that by tying 2 simple parabolic arches together in a single ribbon form we could split the bridge into 2 simpler spans. Thereby keeping a rational structure while making a strong formal statement, in that the bridge when reflected off the water created a double 8 figure, a sign of prosperity in Chinese culture.

As well as the gateway bridge the team was also placed 2nd & 3rd in the competition for two of the 4 secondary bridges crossing the canal.

Enter your email address below to subscribe to our newsletter